Tara was born with a blindness that neither arcane nor divine magic could cure. While that was reason enough for her well-to-do family to shelter and coddle Tara during her childhood, it was not the only thing that worried them. Instead of normal sight, she was born with the ability to perceive a strange, and bewildering world of interactions and echoes. She could not see the world, but could see all of the potential fates and possibilities of every action taken around her. Growing up in a bustling city, the chaos of information she did perceive was overwhelming, and Tara could not make any sense of her visions for years to come.

Try as she might, Tara saw no rhyme or reason to her visions. She tried to reject them, attempting to blank them out and lead a sheltered, miserable life during her teen years. Fate had other plans for the seer though, and an encounter with a band of gypsies changed her life forever.

They had been searching for just such a girl as Tara. They knew she had been born, that she was lost in the world, surrounded by those who could not fathom her gifts. The gypsies recognized her potential immediately, whisking her away from the lap of luxury. While the experience was terrifying at first, the farther and farther away Tara was taken from the great city, the more and more she was able to see. The gypsies taught her their ways, how to read objects by contacting spirits, or gaze into the future with powerful divination magic. As she came to understand the art of fortune telling, she was able to use it like a lexicon to better understand her gift – which was in many ways much more powerful. She learned how to peer through the haze of information and pin-point important events and individuals.

In turn, her kidnappers became a family to her, taking her on their travels to many distant lands, and granting her the freedom she had always wanted. They predicted a girl of her talents would be very important in the coming times, though they would not share how or when.

Nowhere did she find her visions easier to read than when the gypsies booked passage aboard a sailing vessel. The relative isolation of the open seas allowed her to make sense of her visions in almost perfect detail. When she traveled aboard ships, she could understand and predict interactions weeks and sometimes even months ahead of time – whereas on land the constant noise of all the probabilities around her allowed her just days or only hours of accuracy.

Much to the new family’s sadness, Tara longed for the clarity of sight she possessed while at sea. She spent years seeking a captain that would have her. None saw her more than a blind gypsy, a vagabond who would endanger the crew and endanger herself aboard their ship. None except Captain Whitehawk, who possessed enough imagination to see the value in a fortuneteller aboard her vessel. Valuing freedom more than fate, her family of vagabonds let Tara go, warning her, and her Captain, that she may still be of great importance in the coming times. Much to the Captain’s delight, Tara not only proved to be a valuable investment, but a fine (if dramatic) friend.

Whenever Whitehawk would mention gypsy prophecy to Tara, the blind woman would simply smile. “Have I not proven time and again that fortune can always change. I’ll probably see whatever grand scheme the gods have for me before they’ve even thought of it.” 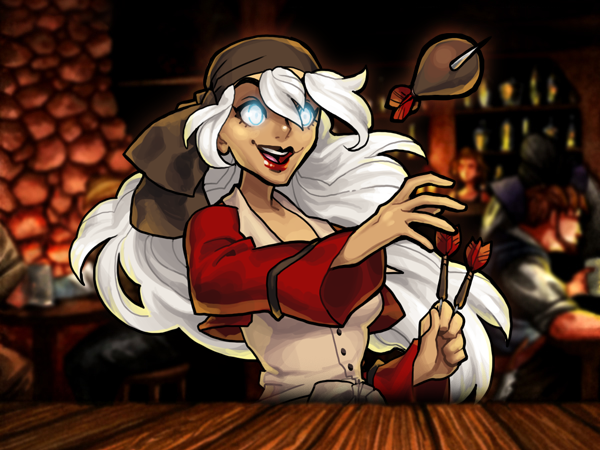 Tagged on: The Red Dragon Inn 4